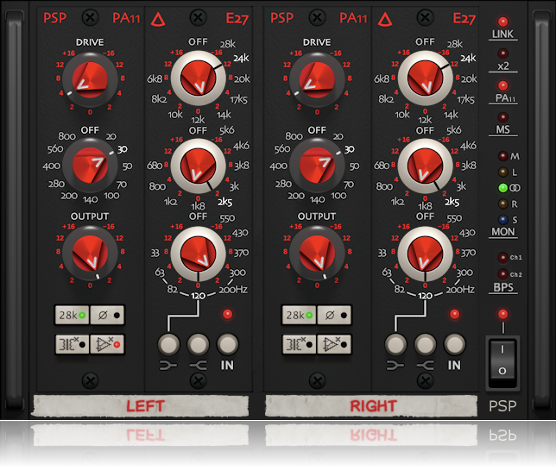 The PSP E27 is a multistage equalizer plug-in (VST3, VST, AAX and RTAS for Windows; AudioUnit, VST3, VST, AAX and RTAS for Mac OSX) modeled after our analog equalizer E27. The PSP E27 offers three-band equalization with nine selectable frequencies in a standard 500x package. The PSP E27 equalizer offers +/-16dB of boost/cut at musicially selected frequency ranges, and offers gentle saturation. Low and high filters can work in bell or shelf mode with a single click. The PSP E27 is suitable for both mixing and mastering and it offers an additional preamp stage for global level control. The PSP E27 EQ plug-in also catches nonlinear behavior of analog devices.

PSP is the sole developer and manufacturer of the PSP E27. Functionality and sound of the PSP e27 have been approved by Avedis Audio Electronics. PSP is responsible for all customer support.

High performance, musicality, ease of use and simplicity are the key elements of the E27. Extended frequency response, smooth, sweet, proportional Q design add up to great sonic features making the E27 invaluable in every project that I used it on.

Very hardware sounding, very familiar sounding. The PSP E27 EQ shows that the line (or separation) between excellent sounding hardware, and beautifully accurate coding necessary to obtain that same musical hardware sound “in the box,” is, for all intents and purposes, gone. In 2016, in the DAW, or out, especially with this PSP EQ, it’s all the same now.

The PSP E27 is a beautiful addition to the PSP line. At its heart is a faithful recreation of the Avedis hardware EQ. But its true strength lies in additional functions like the PA11 preamp module and x2 mode, which allows you to layer two sets of E27 modules in a single instance. This goes above and beyond the hardware. When you add the ability to switch from L/R to M/S operation, this plugin really packs a punch!

Once again PSP delivers something special: new EQ model – based on hardware that may not be familiar to everyone but delivers a superb sound the lovechild  of a Neve/API

The PSP E27 EQ sounds great! It has a certain warmth to it that does not sound digitally produced to my ears! The low end is huge & warm, yet not muddy at all! And the added 28K boost button is a nice addition as well! Brings a certain presence to a vocal even in a mastering situation!
Warren Sokol, Universal Mastering Studios, Hollywood, USA

Why frequencies up to 28kHz?

When you boost or cut a chosen frequency, it is shaped like a bell unless you push in the shelving button – then it’s half a bell where the top of it extends beyond the selected frequency. The top of the bell would be 28kHz, for example, but the curve leading up to the top starts at frequencies within the fundamentals, or within 20khz. So you will easily hear the effect at the very tail end of the audible spectrum without accentuating siblance or already aggressive high frequency in the source. PSP worked hard to have higher frequencies sound smooth and retain much of the harmonics found in the E27 hardware. After you hear it, it will be part of your eq vocabulary.

How does it compare to the hardware E27?

It was not an easy task for PSP Audioware to make the E27 plug-in. There was a lot of data which needed to be studied which included studying the original hardware schematics, performance graphs and audio analysis, and lots of listening tests from people who’s ears we trust.

Is there a characteristic sound to the hardware EQ?

Yes. One way to tell is to have some music playing on your favorite monitors, and suddenly patch the eq in the chain, but without any boost or cut and even with the IN button not engaged. Listen carefully and what you will hear is the characteristic sound. Though the frequency response is flat when no eq is used, an increase in depth is often noticed with this simple test.

Nothing is transparent; everything has a sound.

How narrow is the bandwidth?

The bandwidth (also called Q) varies depending on how much boost or cut there is. The more you boost, the narrower the Q, going from a fairly a broad bandwidth to medium.

Here is a graph of this Relative Q feature.

Bell vs Shelf using the two push-buttons at the bottom... Explain.

If you are at 33Hz, the -3db point with the bell is near 15Hz so it’s not really practical to have shelving at 33Hz with this eq. As the graph can also show, having a Shelf at 33Hz would not do any good.